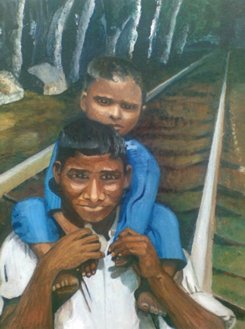 The photo is of Raj and Sayvar as they look in 2014, the painting shown depicts the true story of these two courageous boys who though destined for a different journey by others, found their true journey and purpose by God’s amazing grace. Living in a slum by the railway track was ‘home’ for Raj and Sayvar, until their Dad tragically died…..leaving this vulnerable family unguarded. Mum remarried and their whole world began to drastically change. The new Dad exerts his authority and sends Raj aged 12 away ‘to make a new life for himself’ and soon after that 3 year old Sayvar gets put on an outgoing train – alone – abandoned, given to the approaching darkness – nobody knowing this precious one’s lungs are already filling up with TB.

But God had better plans, plans for a hope and a future. He, who is not willing that any should perish, placed a neighbour at the next station, (which was one hours journey) he saw abandoned Sayvar and returned him to his brother.

Plucked from the darkness, Sayvar finds his resting place between his brother’s shoulders. Together they leave the darkness and enter Morning Star church. Accepted, loved, a new home found with mother, father, brothers and sisters gathering round.

Healing comes, TB gone, an education received, hope and a future secured. These two boys have continued in education in the care of Morning Star Ministries.

The scripture they know off by heart has become their reality Psalm 27:10:

‘When my Father and Mother forsake me, then the Lord will take me up’